Most Opposition leaders failed to turn up at Rahul Gandhi’s Iftar.

Congress president Rahul Gandhi’s much publicised Iftar that was meant to once more show opposition unity flopped as only 4 of the 18 parties invited turned up.

Big guns like Mamata Banerjee, Akhilesh Yadav, HD Kumaraswamy failed to turn up for the Iftar despite getting an invite.

But as a consolation, former president Pranab Mukherjee turned up and was prominently seated next to Rahul Gandhi at the Iftar hosted in Taj Hotel in Delhi. Among those who attended the Iftar were Ghulam Nabi Azad and CPM general secretary Sitaram Yechury.

Rahul Gandhi’s Iftar was billed as yet another show of unity after the show in Bengaluru when major opposition parties held hands as a challenge to the BJP and its poster boy Prime Minister Narendra Modi.

Despite the top guns failing to turn up, Congress leaders said nothing much must be read into the absence. Many Opposition party leaders had other engagements and the invite was sent at short notice. 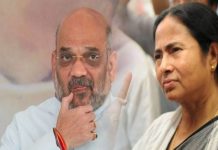