Qatar said the present crisis is unfortunate and they don’t know the real reason behind it. In an interview given to Al Jazeera, Qatar foreign minister Mohammed Bin Abdulrahman al Thani said.

“Regarding the reasons for this escalation, honestly, we don’t know if there were real reasons for this crisis or whether it was based on things we’re unaware of. If there were real reasons, it would have been put on the table for discussion during the GCC meeting, but none of that was mentioned. It wasn’t mentioned either during the American-Islamic-Arab summit in Riyadh. There were no indications whatsoever.” Mohammed Bin Abdulrahman al Thani said.

“There was an unprecedented escalation from the mass media of these countries insulting a brotherly nation, using the type of language that was never used before against the leadership. Qatar has not met this escalation with escalation. We’ve been trying to deal with this wisely. We haven’t responded to them on the same level.” He said.

He also said the emir of Kuwait will be traveling to Saudi today for mediation.

He added the present crisis has put a “big question mark” about the future of the Gulf Cooperation Council (GCC). 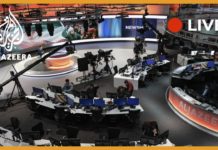