The NIA interrogated him at an undisclosed location in Bengaluru. “Upon interrogation, it is learnt that he had visited an ISIS medical camp in Syria in early 2014 for treatment of ISIS terrorists and stayed with Islamic State operatives for 10 days and returned to India,” the NIA said in a statement.

Rahman, a resident of Bengaluru’s Basavanagudi, allegedly confessed that he was involved in activities related to the Islamic State Khorasan Province (ISPK) and other ISIS operatives in Syria. He was allegedly developing a medical application to help ISIS operatives in conflict zones and other weapons-related apps for ISIS fighters, NIA said.

The NIA also conducted search and seizure operations at three locations belonging to Abdur Rahman upon his arrest and seized digital devices, mobile phone and a laptop, which NIA claims contains incriminating materials. 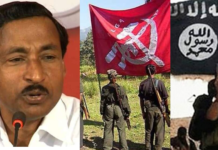 No Longer Aazadi, It Is Fight For Radical Islamic State in Kashmir