Chennai: There was a sudden but transient setback in the health condition of former Tamil Nadu chief minister M Karunanidhi. However, doctors were able to stabilise him. He continues to be monitored round the clock.

As the news of a setback in the DMK supremo’s health spread, there was chaos and confusion outside the hospital where he was being treated. Rumours spread thick and fast on Kurana’s health. What prompted the sudden chaos was when Chief Minister K Palaniswami cancelled his events in Salem and have rushed back to Chennai. Family members of the DMK leaders also rushed to the hospital. Security has been increased both outside the hospital and DMK headquarters.

As matters threatened to go out of control outside the hospital, a health bulletin was put out.

“With active medical support, his vital signs are normalising. He continues to be closely monitored and treated by the panel of expert doctors,” Dr Aravindan Selvaraj, Executive Director of Kauvery Hospital here said in the press release. Earlier in the day, Vice-President Venkaiah Naidu visited the ailing DMK leader. “Visited Kauveri Hospital and met former Chief Minister Thiru Kalaignar Karunanidhi. Met his family members and doctors and enquired about his health. Doctors said he is stable. Wish him a speedy recovery,” Naidu tweeted after his visit. 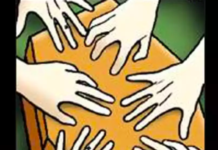