With this message coming from Delhi from top sources, the race has begun for the post of KPCC chief. While senior leader DK Shivakumar is the front-runner, there are two others at his heels – former union minister KH Muniyappa and Lingayat leader MB Patil.

Both Siddaramaiah and Rao put in their papers after the party fared disastrously at the recent by-elections to 15 seats in the Legislative Assembly.

Muniyappa has already aired his ambition saying seniority, loyalty and service to the party should be the criteria. “I am ready to accept the responsibility (of KPCC president) if the high command chooses me,” he said in Delhi.

Shivakumar has also indicated that he is in the race. Prominent MLA SN Narayanaswamy has urged the high command to consider Shivakumar for the post. “He is an able and popular leader. He has the capacity to take everybody along,” he said.

However, in another twist, Siddaramaiah is backing MB Patil, sources indicated. This is because Patil is a Lingayat and his elevation would draw the numerically strong community to the party. Chief Minister BS Yediyurappa is himself a Lingayat and is at the fag end his career. 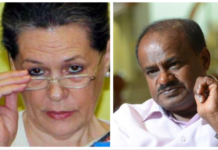