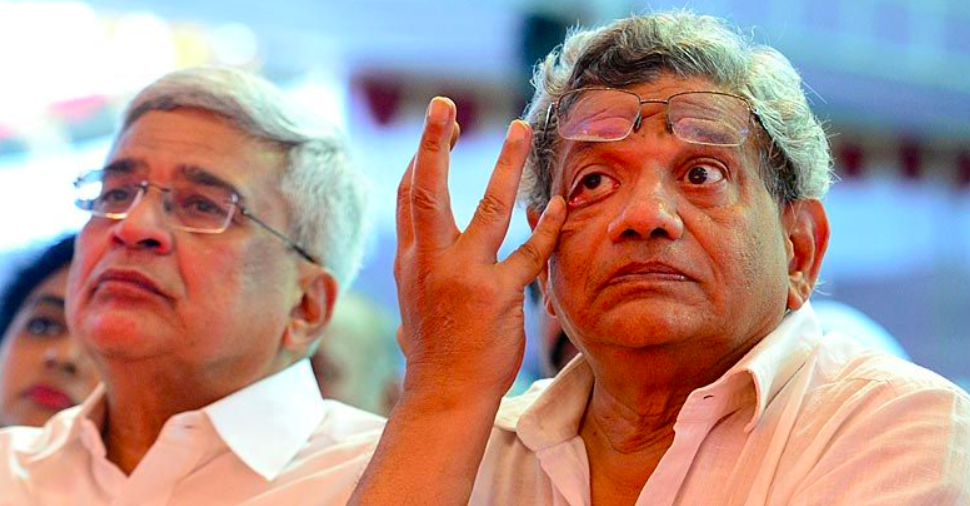 Hyderabad, in a way, will play a crucial role in April this year in deciding on unity among Opposition parties in taking on the BJP in the 2019 general elections. It is in the capital city of Telangana that the CPM congress will decide on accepting one of the two divergent viewpoints on an alliance with the Congress party.

The voting became necessary as the draft political resolution adopted by the CPM’s central committee (CC) at its meeting in Kolkata recently ruled out “any form of electoral alliance or adjustments with the Congress.” While party general secretary Sitaram Yechury wanted an alliance with the Congress in order to take on the BJP, the hardline faction headed by former party general secretary Prakash Karat faction vehemently disagreed. It was a defeat not once, but twice for Yechury – at politburo and the central committee. Ideally, he should have resigned following the sterling example set by P Sundarayya in 1975. In his resignation letter addressed to PB members, he said that a leader ‘who could command the confidence of major units and have the authority and confidence to undertake the responsibility’ should be his replacement.

Sundarayya resigned following the decision of politburo to join hands with Jan Sangh (which is fascist in nature) to fight the Emergency. The same reason – of failure to get a backing —  is valid in the case of  Yechury too.

But to be fair, Yechury offered his resignation. But unlike Yechury, Sundarayya did not want to cling on to the post after making up his mind. Yechury, who loves to play a national role and is flamboyant, meekly surrendered before the collective opinion of the CC and politburo.

It is role reversal so far as the stand is concerned of the Red brigade. While CPM’s alliance with a fascist movement to fight the Emergency was the reason that created a sharp divide in the leadership in 1975, ironically it is the dispute over joining hands with other parties to fight a fascist movement that has resulted in a divide now.

While the dispute between Karat and Yechury led to the present crisis, in 1975 it was the dispute between Sundarayya and B T Ranadive. “When PB members, BTR and myself, are at loggerheads on many issues and since there is no prospect of improving the situation, it is better to resign instead of further damaging the party,” he wrote.

Like Sundarayya, Yechury is also from Andhra Pradesh where the CPM doesn’t have the organizational strength to match with its counterparts in Kerala and Bengal. Sundarayya realised this as a reason for his lack of control in the party, a fact applicable to Yechury too.

Though he took over as general secretary in 2015, Yechury was a failure in exerting control over PB or CC, leading to defeat of his agendas multiple times over the past three years.

The resignation letter of Sundarayya was kept a secret by the party leadership then. Later, after the death of Sundarayya, the copy was made public by a few of his friends in Andhra Pradesh.

Yechury is very keen to carry forward the issue to the party congress. He will wait till counting of votes in Tripura is held on March 3. If BJP wins the election or manages to secure sizable votes, Yechury’s stand on alliance with Congress will be vindicated. But in rejecting the Yechury line, the CPM seems to have created yet another blunder that would only undo the party’s avowed aim of resisting the BJP-RSS upsurge. If the party congress too votes out Yechury’s stand, this will be CPM’s second major blunder after the one in 1997 when it shot down a proposal to make Jyoti Basu the prime minister.

The resolutions are rooted in a personal battle raging in the CPM top decision making body – to be specific, an ego battle between Prakash Karat and Sitaram Yechury. It is also a battle between sticking to ideology and pragmatism and a tug of war between the Kerala and Bengal factions. While the CPM cadre is intact in Kerala, it is in tatters in Bengal as its men joined the Trinamool Congress. The Bengal unit is keen to rebuild its base even if it means a truck with the Congress. Unlike the Kerala unit, the CPM and Congress are not enemies in Bengal.

Even in Kerala, many Left supporters saw the Karat-backed resolution as an abdication of the party’s larger responsibilities. The stand taken by Yechury for a broad anti-communal platform was more transparent and practical in view of the challenges posed by BJP-led forces.

But the notion that the Kerala unit of the CPM was united behind Karat is also wrong. There were dissident voices in all levels, but, those were silenced by the leadership headed by a tough Pinarayi Vijayan, which unlike the leadership in centre, believes in autocracy. The Kerala unit is ruled by an iron fist by Vijayan where no debate, like what happened in the CC, is entertained. Voting is out of question. Only VS Achuthanandan conveyed his dissent in clear terms as he has nothing to lose. Kerala’s Finance Minister T M Thomas Isaac too expressed symbolic dissent by abstaining from voting. It remains to be seen what price he will have to pay for disobedience.

There is a reason why Pinarayi backs Karat. He is indebted to Karat because as party general secretary, he backed Vijayan who was caught in a scam related to SNC-Lavalin power project. When the moment came for him to repay the debt, Vijayan did it in style by not only winning the CC battle for his mentor but also setting the stage for repeating such a spectacle in the Hyderabad party congress if the issue goes for voting there too.

The present crisis in the CPM shows that it is the Kerala unit of the party, led by Pinarayi Vijayan, who is calling the shots within the CPM at the national level.

Practically speaking, it is a fact that in 2019 election unless all secular parties are united it would be difficult to defeat the BJP. The CPM should have utilised this opportunity to take a politically viable line. If not a direct tie up an understanding depending upon the situation should have been the policy of the CPM. But it is the interest of the prominent Kerala faction that played a big role in prompting Karat to press for his hard-line approach. In the process, it is the national interest that has got badly hit.

Though the Kerala unit served its selfish interest, one major danger is that the minorities may not sail with the CPM in case the party decides against any tie-up with the Congress. One of the first critics of the CPM Central Committee stand was Bishop Geevarghese Mor Coorilos of the Malankara Orthodox Church in Kerala.

Within minutes of the result of the CC voting was out, the bishop asked in a Facebook post: In which age is the CPM been living in?

“The decision will be a big relief for communal forces, but, it will disappoint all secular forces. It’s a decision that will weaken the unity of secular movements,” he said. Coorilose’s concerns were shared widely by minority community members in Kerala and their concerns are going to determine the verdict of 2019 Lok Sabha election in the state.

The core argument of the Kerala party that the Congress was its major opponent in the state and any alliance with it will harm the party’s prospects in the 2019 poll is likely to fall flat if the concern of minorities in the state translates into votes next year. In the 2016 assembly election, the support of minorities helped the CPM win crucial seats in three major districts. If the Congress-led UDF campaigns smartly and succeeds in conveying to the voters that they the real opponents of Narendra Modi and not the Pinarayi camp, the result will spell doom for the party.

With the BJP eyeing a dozen constituencies in these three districts, most of the tri-corner fights can sway to the advantage of UDF in the event of an effective minority consolidation.

The CPM should decide if it wants to serve Kerala’s interest or that of the nation. But for that, Yechury has no voice or muscle in the party.