In what could be a cheap trick Fox Sports Australia has nominated Virat Kohli ‘Vettel of the Week’ award in which his photo has been put up along with some animals.

Just when it seemed that the DRS fiasco was over and cricket would return to being a gentleman’s game between India and Australia, a new low awaited fans across the globe.

This time, Fox Sports Australia seems to have gone insane or claim to have had a brain fade later for their latest Facebook post.

On Friday night, while running a poll on their official Facebook page for their ‘Vettel of the Week’ contest, Fox Sports asked its fans to vote between a puppy, a panda, a kitten and India captain Virat Kohli.

“Recent events have prompted a return of our Vettel of The Week award. Kids, ask your grandparents. The rest of you know the drill,” the post says with a collage of four images.

Well, this is not the first time for Australian media to hit low on players especially Virat. In 2015, a poll ran by news.com.au had Kohli listed as one of the nominees for the biggest sports jerk of the week.

Although there were many criticism from the fans the media house didn’t bother to respond. This is not new to them though.

India Australia series never went down without banters in which Australian media stands first to attack personally unlike Indian media. The latest insane post by Fox Sports will further heat up the things in the ongoing series. 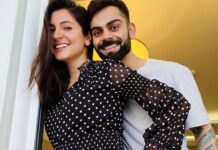