PM Narendra Modi factor is also dominating the issues of Corona epidemic, racism, unemployment along with campaigning for the presidential election on 3 November in America. President Donald Trump from the Republican Party and former Vice President Joe Biden from the Democratic Party are in the fray. Trump is trying to cash in on his friendship with Indian Prime Minister Narendra Modi to woo the Indian-American community in the election campaign.

In the latest election survey, Trump is also seen to be benefiting from friendship with Modi. A survey of a party engaged in Trump’s election campaign claimed that Indian-American voters are more inclined to support Donald Trump. According to the survey, Trump is likely to get more votes from Indian-Americans than Biden. The main reason for this is the friendship between Trump and Modi

In support of Indian-American Trump: Survey

According to a survey by Trump Mason, the Indian American Finance Committee co-chair, at least 50 per cent of potential Indian American voters who voted for a Democrat candidate in the last election would join Trump this time. In the survey, 12 such factors have been mentioned, on the basis of which trumps remain the choice of Indian Americans

12 reasons for leaning towards Trump:

Even if the election is not defeated quietly

US President Donald Trump on Wednesday asked a journalist about the possible election results, saying that there would be no power transfer. This government will remain. If something goes wrong, the Supreme Court will go. Trump said he believed the election results would go to the US Supreme Court, as he suspected postal voting. Trump, defending the appointment of the new judge, said, “I think the election will end in court.” Therefore, it is very important to have nine judges there. It is good that this be done before the election because the scam that the Democrats are doing will be before the US Supreme Court

President Trump has once again raised doubts about the safeguarding of the vote via ‘mail-in-ballot’. Trump said, “I am constantly complaining about voting through email and it is a disaster.” He said fraud in mail voting is easy. I am objecting to this. 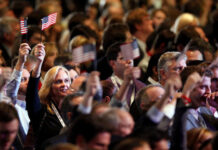