Telangana rains: Two control rooms are being set up in Hyderabad. Two choppers have also been deployed for rescue operations

Several areas in Hyderabad and rural areas have been flooded with non-stop rains over the last three days. The weather office has predicted more rains in the next three days and a high alert has been sounded in many areas of Telangana. Over 600 buildings have been declared vulnerable in Hyderabad.

Chief Minister K Chandrasekhar Rao has asked officials to be on high alert for any incidents of flooding.

Rivulets and streams are nearly overflowing and breaches have been reported in some areas. In Jayshankar Bhupalpally district, 12 farmers from Kundanpally village were rescued by a helicopter. The National Disaster Response Force or NDRF have deployed teams for rescue and relief.

A truck was washed away in Siddipet. The cleaner could be rescued, but the driver was feared drowned in floodwater.

Two control rooms are being set up in Hyderabad. Two choppers have also been deployed for rescue operations. The state disaster response force has been put on alert.

The Chief Minister said there was a threat of inundation due to overflowing tanks in Warangal and Karimnagar.

“The Chief Minister reviewed the rain and flood situation at the Pragathi Bhavan and spoke with the Chief Secretary, the Director-General of Police and the Ministers, and ordered the setting up of two control rooms in Hyderabad. He also instructed Ministers to coordinate with the Collectors and police officials on a regular basis,” the Chief Minister’s office said in a statement, news agency ANI reported.

“The flooding has affected around 500 houses and the low-lying areas around Warangal and Bhupalpally districts. Over 1,000 people have been moved to a safer location, and 13 were rescued by the fire department,” an official said. 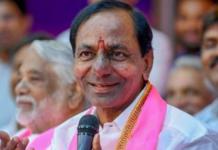