If rice is not cooked properly, it could become poisonous, says a new study.

Scientists claim rice should be steeped in water overnight to flush out arsenic  and then it can be rinsed and cooked the next day.

Rice eaters could be in danger of eating arsenic if they don’t cook it properly, experts have warned.

The chemical has been linked to cancer, diabetes, heart disease, and developmental problems, reports The Sun.

Rice tends to absorb arsenic more than other cereal crops and also takes it up from pesticides in soil and industrial toxins.

The latest advice comes after health officials warned burning potatoes, chips and toast could be linked to cancer.

Arsenic occurs naturally in the environment, but rice tends to absorb it more than other cereal crops and also takes it up from pesticides in soil and industrial toxins.

Experiments suggest the amount of arsenic in rice can be slashed by using different cooking methods.

Scientists claim rice should be steeped in water overnight to flush out the poison, and then it can be rinsed and cooked the next day.

A third method — where the rice was soaked all night — found the arsenic levels were cut by 80 per cent.

The experiments were conducted for the TV show Trust Me, I’m a Doctor, which aired in Australia on Monday on the ABC. 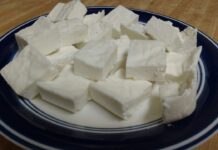 Here is How Raw Paneer Helps in Weight Loss