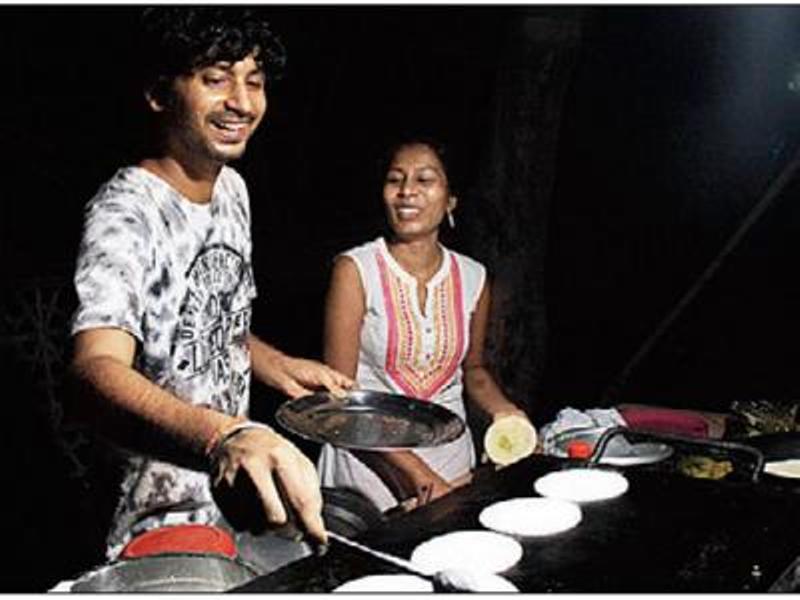 Sneha Limbgaonkar does thesis for her PhD and joins her husband’s roadside eatery at night to serve hot parathas to make both ends meet.

This is a story of three states, one more than Chetan Bhagat’s Two States. A scholar with a rare determination. But the settings are totally different. No posh class rooms, hostels or dance. A bit of romance? Yes.

Sneha Limbgaomkar from Maharashtra and a PhD scholar at Kerala University does her thesis during the day and serves hot parathas at a makeshift roadside eatery (called Thattukada in Malayalam) near Technopark in Thiruvananthapuram, the capital city of Kerala.

Her life is a story worth a movie. She fell in love with Premshankar Mandal of Jharkhand over Orkut and got married much against the wishes of her orthodox parents.

The couple soon moved to Kerala where Sneha got a doctoral research fellowship in Kerala University. Premshankar quit his job at CAG office in Delhi to join her. But the financial grant was too little to run a family or two. Premshankar, a graduate in social work, hit upon an idea and started running an eatery. He loves cooking and in the process he started earning some money to help Sneha obtains her PhD.

“We are not just meeting our daily needs with this but saving money so that she could be a scientist. Maybe, in future, I could even open a restaurant,” Premshankar told the local edition of The Times of India.

From her classes and thesis work in the University, Sneha joins her husband at the tava every evening. She does not waste time trying to freshen up.

The specialities at the joint include parathas, omelettes and dosas.

Now to the romance part of their story. After the two met on Orkut, Premshankar would ring her up from an unknown number. “All I could hear was this breath. I knew it was him,” Sneha told ToI. She came to Kerala in 2014 for her MPhil course and has stayed here since. They got married in 2016.

You May Like To Read: How About Tasting A Virtual Biryani Through Sensors?

Sneha is doing research on “isolated characteristics of digestive enzymes of carnivorous plants”. After helping her husband, she returns to her books till 3 am. She is not bothered about all the fuss over a research scholar working at a wayside eatery. “Sometimes people ask me, if thattukada befits the image of a research scholar. I find that question strange, because I don’t rob or kill people to make money to study and live. I have always been a fighter and I know I am going to make it,” Sneha said.

Don’t Miss To Read: Spiders feed on an estimated 400 to 800 million tons of insects and other pests annually

The couple ultimately plans to migrate to Germany so that Sneha could do further research.

“We could even run a thattukada (wayside eatery) in Germany, going forward,” she added.