Hyderabad: Actor-turned-politician Vijayasanthi made a made a scathing remark at PM Modi, referring to him as a “terrorist”.

“Everyone is scared that at what moment Modi will shoot the bomb. He looks like a terrorist. Instead of loving people, he is scaring people. It’s not the way how a PM should be,” she said.

She made the comments in the presence of Congress president Rahul Gandhi when she was speaking at a public gathering in Telangana’s Shamshabad.

The BJP responded with a tweet from its official account.
“Now Congress is truly raising concerns & worries of terrorists in Pakistan. Welcome to New India. Yeh Dar Acha Hai,” the tweet read.
Saying that the upcoming Lok Sabha elections were essentially a battle between PM Modi and Rahul Gandhi, Vijayashanti also claimed the Congress chief was “fighting for the survival of democracy”, while the Prime Minister has “ruled like a dictator”.

“He wants to rule like that in the next five years, but people will not give him that opportunity,” the former parliamentarian said in Telugu.

She also said that a vote for the ruling Telangana Rashtra Samiti or TRS would go to BJP as “Modi and TRS president K Chandrasekhar Rao are one.”
Vijayashanti was earlier affiliated with BJP in the early days of her political career.

After close to 10 years with the BJP, she floated her own party, which later got merged into Telangana Rashtra Samithi. Later on, she switched allegiances to Congress in 2014 before the general elections. Last year, Congress appointed her as their star campaigner for Telangana. 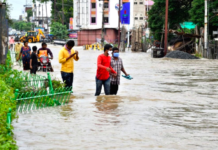