Bengaluru: The controversial 18th-century ruler of Mysuru, Tipu Sultan, continues to haunt Karnataka Chief Minister BS Yediyurappa. On Wednesday, the Karnataka High Court pulled up the Yediyurappa-led BJP government for cancelling celebrations of birth anniversary of the ruler on November 10.

However, the court refused to grant a stay on the July 30 government order cancelling state-sponsored celebrations of Tipu Sultan.

A division bench of Chief Justice of Karnataka Abhay Shreeniwas Oka and Justice S.R.Krishna Kumar pulled up the government for its hasty decision and reminded the dispensation that the 2016 order had detailed the importance of celebrating Tipu Jayanti including reasons like upholding constitutional values, secularism, promoting peace and harmony between communities.

The court also tweaked the ears of the government for cancelling the earlier order without proper thought or reasoning. The government also did not prepare any report on the possible outbreak of violence if the state-sponsored celebrations continued.

In 2015, the first year of official celebrations, violence broke out in Kodagu district in which one person died, several were injured. Kodagu had suffered the worst torture at the hands of Tipu Sultan and his troops.

The petitioners argued that the decision by Yediyurappa government was taken in haste and arbitrarily as there was no council of ministers at the time; only Yediyurappa had taken an oath of office. The court observed that change in policy must be made “fairly and not arbitrarily’.

The court has asked the government to reconsider its decision and come before it on the third Monday of January next year with a proper report reasoning out the move.

The AG also said that this was not the time for celebrations as the state is yet to recover from one of the worst floods in over a century that has left a trail of devastation in many districts.

Soon after coming to power three months ago, Yediyurappa had moved swiftly and cancelled a 2016 order made during the Siddaramaiah-led Congress rule in the state on the celebrations. He had also promised to wipe out Tipu Sultan from school textbooks.

On the ground, the BJP and its right-wing supporters have been spreading tyrannical stories of Tipu Sultan, especially the alleged mass murder, torture and pillaging against Kodavas, Brahmins and Christians. These events are well chronicled in Karnataka’s history.

However, the Congress and minority groups consider the late ruler a hero for taking up arms against the British colonisers.

Tipu Sultan was born on November 10, 1750, at Devanahalli, on the outskirts of Bengaluru, and was the ruler of Mysore from 1782 till his death in 1799. His rule was often described as tyrannical and doubts have been raised if he was a freedom fighter or just wanted to expand his kingdom by annihilating opponents. 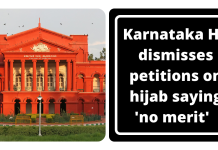