DMK is upset and cadres angry at TN govt refusal to allow mortal remains of Karunanidhi to be buried at Marina next to his mentor CN Annadurai.

Chennai: Moments after the demise of DMK supremo Muthuvel Karunanidhi, a major controversy arose over the place of his burial. The DMK wants the mortal remains of Karunanidhi to be buried next to that of his mentor CN Annadurai at the Marina beach. But the AIADMK government has put its foot down citing legal hurdles.

The TN government says there is a court ruling prohibiting any further burial at the Marina and has allotted space at Gandhi Mantap.

A livid DMK has now reportedly sought the help of the Centre for a space for their leader at the Marina.

The AIADMK is worried that even in death, Karunanidhi may hijack the Dravidian movement and this will cast a shadow on the polls round the corner. And getting buried next to Annadurai has huge political significance. But behind this standoff is the undercurrent of animosity between the AIADMK and the DMK. The fact remains that the PILs requesting for the prohibition of burial at Marina were filed soon after the demise of J Jayalalithaa. And these PILs were filed allegedly by DMK supporters who cited coastal regulations against using the Marina for burials.

But sources said that there is no court order specifically prohibiting burial and the matter is still before the court. If the AIADMK wants, it could move the court as early as tonight or tomorrow requesting either for a clarification or relaxation of rules.

Another way out is instead of political posturing, the AIADMK and the DMK could jointly move the court for allowing the Marina for burial.

Sources also said that this was an opportunity for the AIADMK to show statesmanship. Karunanidhi’s son MK Stalin had met Chief Minister Edappadi Palanisami in the morning requesting for space at the Marina.

However, the DMK cadre is restless and want the Marina as the space for the burial of their leader. Already ‘Karunanidhi’ slogan has been replaced by ‘Marina’ and minor skirmishes have broken out in Chennai outside the hospital.

Sources fear that this may spin out of control unless capped early.

The DMK could use this as an emotional point in the coming elections.

Meanwhile, the mortal remains of Karunanidhi would be taken to his Gopalapuram residence tonight. The body would be placed at Rajaji Hall for the public to pay respects.

Karunanidhi passed away at Kauvery Hospital here due to multiple organ failure due to ageing. He was 94.

Karunanidhi’s health started deteriorating from morning when doctors at the hospital admitted that “Maintaining his vital organ functions continues to remain a challenge considering his age-related ailments.” 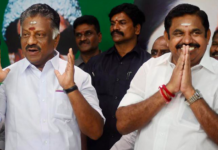