In the last part of ‘Stephen Hawking and the mind of God’, V S Ravi searches for God in the words of Nobel Laureates.

So what is Omar Khayyam’s advice to vexed and doomed humanity. The following one quatrain and two lines of another quatrain which belong to the third category provide the answer:

“Ah fill the cup :-what boots it to repeat
How Time is slipping underneath our Feet:
Unborn TO- MORROW and dead YESTERDAY
Why fret about them if TO-day be sweet”

and in the first two lines of another quatrain:

“Ah make the most of what we yet may spend,
Before we too into dust descend;”

George Santayana the 19th century philosopher said “There is no cure for birth and death save to enjoy the interval”. Several centuries earlier Omar Khayyam had advocated the same philosophy in stronger terms as quoted above. It may be pointed out that no less a person than immortal Shakespeare himself had held similar views about the limitations of human knowledge. He made Hamlet say:

“There are more things in heaven and earth Horatio, than are dreamt of in our philosophy”.

Obviously, Shakespeare by using the word philosophy referred to the entire range of human knowledge including science.

To recapitulate, from the beginning of time, saints, sages and philosophers have been unable to answer the question of the existence of God and creation, and  have held the view that as man’s stay on this planet is ephemeral, the only sensible thing for him to do is to make the most of his short stay by drowning himself in sensual pleasures before the final curtain falls. As against these views about the limitation of human knowledge which will not permit man to ever unravel the mysteries of creation or answer the question whether God exists or not, let us turn our attention to the utterances of some of the greatest scientists in this regard. Let us first have a look at what Einstein had to say:

“I cannot conceive of a personal God who would directly influence the actions of individuals, or would directly sit in judgment on creatures of his own creation…. My religiosity consists in a humble admiration of the infinitely superior spirit that reveals itself in the little that we, with our weak and transitory understanding, can comprehend of reality.”

“I believe in Spinoza’s God, Who reveals Himself in the lawful harmony of the world, not in a God Who concerns Himself with the fate and the doings of mankind”.

The most beautiful and deepest experience man can have is the sense of the mysterious. It is the underlying principle of religion as well as all serious endeavor in art and science. To sense that behind anything that can be experienced there is a something that our mind cannot grasp and whose beauty and sublimity reaches us only indirectly and as a feeble reflection, this is religiousness. Thus Einstein claimed that if at all he was religious, it was in the sense that he marvels at the beauty and harmony in the laws of the universe, as Keats said about three centuries earlier in the following lines in his “ Ode on a Grecian Urn”:

“When old age shall this generation waste, Thou shalt remain, in midst of other woe Than ours, a friend to man, to whom thou say’st, “Beauty is truth, truth beauty,” – that is all Ye know on earth, and all ye need to know.”

It would come as a surprise to many that Neils Bohr, one of the giants who formulated Quantum Mechanics, was known to be an atheist. Einstein found himself unable to appreciate the mind boggling paradoxes of quantum mechanics and reportedly told Bohr that God does not play dice with the universe, to which Bohr responded by asking him not to tell God what to do — He does play dice but throws them where we cannot see.

To revert to Hawking again, though there had been a slight ambiguity in some of Hawking’s earlier statements in his life regarding his denial of God, he declared with a finality in his book “ Brief answers to big questions “ published posthumously, that the question what was there before the Universe was created has no meaning, “just as asking for the directions to the edge of the earth- the Earth is a sphere that doesn’t have an edge, so looking for it is a futile exercise”. He believed that there was absolutely no necessity to invoke the existence of God as Science, with its rational faculties, and resources at its command, can eminently explain all the phenomena of nature.

His final analysis is summed up in the following paragraph from his book, mentioned above:

“We are each free to believe what we want to and it’s my view that the simplest explanation is that there is no God. No one created the universe and no one directs our fate. That leads me to a profound realisation: probably there is no heaven and afterlife either. I think belief in an afterlife is wishful thinking. There is no scientific evidence for it and it flies in the face of everything we know in science. I think that when we die we return to dust. But there’s a sense in which we live on, in our influence, and in our genes that we pass on to our children. We have this one life to appreciate the grand design of our Universe, and for that I an extremely grateful” . Thus Hawking remained till the last breath a conformed, self-proclaimed atheist. When he died in March at the age of 76, a memorial service took place at Westminster Abbey in London and his ashes were interred between the two greatest British scientists he admired — Sir Isaac Newton and Charles Darwin.

Till the end Hawking remained a totally cerebral creature strapped to his wheelchair but voyaging through strange seas of thought alone. The fact that he was not awarded a Nobel Prize seems irrelevant now. In history’s hall of fame he ranks alongside Copernicus, Newton, Galileo , Darwin and Einstein. 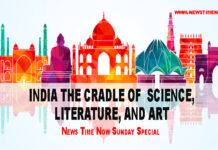