Bengaluru: Actor Samyuktha Hegde and two friends Saturday alleged that they were victims of moral policing at a public park here where they had gone to exercise. Samyuktha alleged that she was heckled by a group of people led by AICC member Kavitha Reddy for wearing a sports bra in a public place.

Samyuktha soon took to Instagram and said: “This is so wrong. I had my pullover on. We came here and I removed it and did my warmup. We were just exercising with hoops and this woman (referring to Kavitha Reddy) came up to us and started saying that we were being indecent for wearing a sports bra in a public place. We were just exercising by ourselves. Now the people here are saying that we consume drugs. Just because the drug case is being talked about, they are accusing us of consuming drugs.”

Breaking down, Samyuktha alleged that Kavitha Reddy likened them to cabaret dancers and questioned the clothes they were wearing. The actor also said that she was threatened by Kavitha. “A******s, if you wear such clothes the next time and something happens to you, don’t come crying to anyone. This is what she told us,” Samyuktha alleged in her Instagram live.

According to Samyuktha, the police arrived at the spot and told her and her friends to leave and took no action against the hecklers. 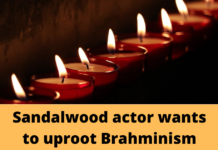