Thiruvananthapuram: Congress leader and Thiruvananthapuram MP Shashi Tharoor seems to be living in fear of his party getting defeated in the coming elections. He has predicted that if the BJP goes on to repeat the 2014 win in the Lok Sabha in 2019, India will then become a ‘Hindu Pakistan’.

Tharoor is clearly wrong and is only whipping up fear among the minorities. His party, the Congress, has, for years, made the minority Muslim community a vote bank. Now this vote bank is alarmingly depleting for the Congress and Tharoor wants them desperately back by injecting fear in them.

Tharoor’s statement also shows that he has no faith in the Indian electorate. For years, the Indian voter has shown how the nation can be kept united.

The MP instilled further fear among the minority when he said if the BJP wins, the saffron brigade will tear up the Indian constitution and create a ‘Hindu Pakistan’. If this is not nonsense, what is? And who first ‘tore’ up the Constitution? It was Indira Gandhi. Tharoor seems to have forgotten that.

Tharoor made his Hindu Pakistan comments while delivering a lecture on ‘Threats faced by Indian democracy and secularism’ here on Wednesday.

Probably, Tharoor should also speak a bit on Muslim Kashmir in the same vein.

The Congress MP said three factors stand in the way of the BJP declaring itself as a Hindu nation, thus fulfilling the dreams of Veer Savarkar.

“So the great danger then is that if they are able to win a repeat of their current strength in the Lok Sabha, then frankly our democratic constitution as we understand will not survive because they will have all the three elements they need to tear up the Constitution of India and write a new one. That will be a new one which will enshrine the principle of Hindu Rashtra, will remove equality for minorities, that will create a Hindu Pakistan. That’s not what Mahatma Gandhi, Jawaharlal Nehru, Sardar Patel and the great heroes of our freedom struggle fought for.”

Reacting to Tharoor’s statement, Union Minister Rajyavardhan Singh Rathore told ANI: “This is pure hallucination by Shashi Tharoor, I think this is withdrawal symptoms of the fact that neither they are in power nor do they see power coming to them again. It’s Congress that has infringed our Constitution & freedom of our citizens.” 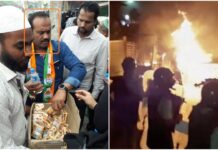