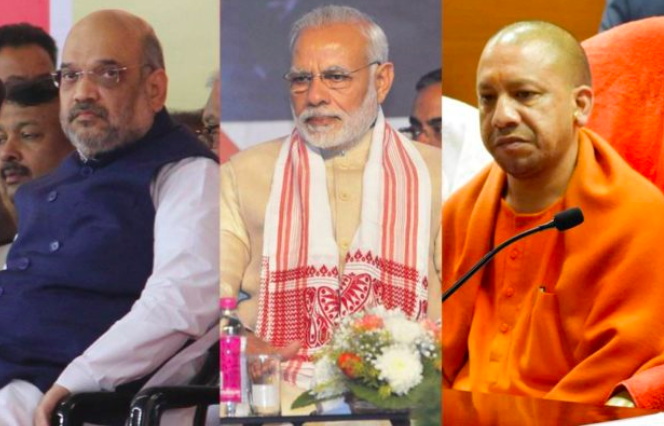 There is unrest in BJP against style of functioning of Amit Shah and Yogi Adityanath.

After signs of a meltdown in UP and Bihar in the recent bypolls, there are murmurs emanating from within the BJP. First came a satirical poem, but soon there will be anger, mainly against two leaders – Amit Shah and Yogi Adityanath.

Sources say that the Advani faction in the BJP may once again start a bid for a change of leadership or, at least, a change in style of functioning of leadership, dominated for over four years by Narendra Modi and Amit Shah. Murali Manohar Joshi is also at the forefront of the brigade for change in the BJP. While Modi may be spared as of now, Shah is surely going to be in the line of fire for his ‘dictatorial’ style of functioning and the string of losses.

The BJP knows that since the arithmetic is heavily against the party now, success in 2019 hinges only on Modi’s chemistry with the electorate. So, Modi is out of the picture. But the tricky question is how to separate Modi and Shah – the twin brothers of BJP’s political machinery. This is where the RSS may step in.

In the Advani camp are Sushma Swaraj, Nitin Gadkari and, possibly, Arun Jaitley. And there is the highly critical group led by former finance minister Yashwant Sinha and Bollywood loudmouth Shatrughan Sinha. Anger is piling up against Shah who refuses to talk things over with party workers or NDA allies. For Shah, it is ‘my way or highway.’ With Shah at the helm, the BJP is seen and perceived as highly authoritarian and dictatorial. He is known for steam-rolling decisions on State leaders of the party and does not have much touch with the grassroot leaders or workers.

He is also a poor negotiator when it comes to dealing with NDA partners like the Shiv Sena or the JD(U). The TDP walked out of the alliance because Shah was not willing to be accommodative. His ‘we do not need you’ big brother bully attitude is costing the BJP dearly. This is what happened in Karnataka where the BJP could easily have roped in the JD(S) ahead of the elections.

The BJP, unfortunately, does not have a Atal Bihari Vajpayee type of leader who knows how to take leaders and workers along. At the other end of the spectrum, political parties are seeing Congress president Rahul Gandhi as more Vajpayee type, willing to be more accommodative and approachable. Despite his shortcomings, he is coming across as someone who is willing to listen, talk, negotiate, concede if needed, honest and forthright.

Shah, on the hand, is perceived as someone who has no qualms in using crooked means to achieving ends – especially in the formation of governments in states where the BJP was no winning horse. His run ended abruptly in Karnataka and the Opposition has started smelling the sweet scent of victory.

If Shah takes credit for all the wins, he has to shoulder the responsibility of defeats too. But how and who will put this message across is the big question. There is fear even among senior leaders in the BJP. Many are looking towards LK Advani for conveying a stern message across..

Apart from Shah, Yogi Adityanath has been a monumental failure for the BJP in Uttar Pradesh. He began well and people built a halo of efficiency and honesty around the saffron clad Yogi. But when it came to administration and delivery, Yogi turned out to be a big zero. He was not able to control either the State or his ministers who are ‘experts’ not in administration, but is delivering foolish statements like Sita was a test-tube baby. As BJP marches towards the crucial general elections, a couple of things would have to happen. Amit Shah should learn to be accommodative, listen to others and change his style of functioning drastically. Secondly, Yogi Adityanath has to be either replaced, if not immediately, in the near future; or he should be given a couple of efficient deputies, surely not the like of his deputy Dinesh Sharma who suddenly discovered that Sita was a test-tube baby.

But the biggest challenge for the BJP would be how to counter the emerging and initially successful idea of ghatbandhan – where it is all against the BJP.