BJP’s senior leaders will meet with Congress President Sonia Gandhi and CPM General Secretary Sitaram Yechury to discuss about the upcoming presidential elections. The meeting is likely to be held on Friday. Sources told ANI news agency that the two leaders of the BJP on Wednesday have informed Prime Minister Narendra Modi about the elections. The NDA candidate will likely submit nomination papers on June 23, sources said.

With the end of President Pranab Mukherjee’s term of office on July 24, the Election Commission announced that the vote will begin and end on July 17.

Submission of nominations will end June 28, EC reported in a notification. The results will be announced on July 20.

Meanwhile, opposition leaders from 17 parties, including Congress, CPM, CPI, TMC, RJD, JDU and more, have gathered in the national capital today to select a common candidate for presidential elections.

The law states that only candidates with the support of 50 or more voters may submit a nomination. Members of the Lok Sabha, Rajya Sabha and state legislative assemblies qualify as voters. 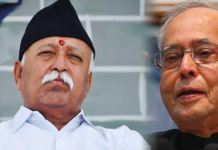