Bengaluru: Karnataka’s Minister for Medical Education, Dr K Sudhakar, who is in charge of battling the spread of COVID 19 in the State, found himself in troubled waters after he tweeted a photo of himself and his children in a swimming pool amid lockdown and as the state was in a grim situation over the spread of the pandemic.

The picture sparked outrage with many terming it as insensitive and outrageous as the people of the state were going through tough times.

The Congress was quick to pounce on the minister. Karnataka Congress president DK Shivakumar slammed the minister and demanded his resignation.

“When the whole world is going through a health crisis, the coronavirus in-charge minister Dr Sudhakar is behaving irresponsibly by spending time in a swimming pool,” Shivakumar said.

“It’s a matter of moral and ethical standards. He must resign out of his own accord and the CM should sack him from the cabinet,” he added.

As the criticism grew louder, Sudhakar pulled down the tweet.

Meanwhile, Karnataka reported 15 new Covid cases on Monday. Four of these new cases were from Hubbli-Dharwad, three each from Belagavi and Mandya, two from Bidar and one each in Bagalkote, Bengaluru Urban and Rural districts. 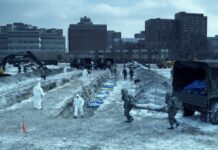