The 33-year-old Chennai techie Shanmuga Subramanian claims he spotted them and the rover rolled out from lander. “Our experts are analyzing,” says ISRO Chairman.

A space enthusiast and techie from Chennai, Shanmuga Subrahmanian who was credited by NASA for locating Vikram Lander last year came up with another claim. In a series of tweets along with images of moon’s surface said that “Chandrayaan2’s Pragyan  “ROVER” intact on Moon’s surface & has rolled out few meters from the skeleton Vikram lander whose payloads got disintegrated due to rough landing”

Reacting to this ISRO chairman K. Sivan said “We have received communication from him (Subramanian). Our experts are analyzing the same.”

“It seems the commands were sent to the lander blindly for days & there is a distinct possibility that the lander could have received commands and relayed it to the rover… but the lander was not able to communicate it back to the earth,” Subramanian added.

There might be a possibility that the rover rolled out when the lander impacted the moon’s surface.

In other series of tweets, Shanmuga said “South Pole region is not always well lit and the lander was in a shallow depth of 2 ms from the surface so it was not visible in Nov 11th’s NASA flyby due to different angle of incidence & would be difficult for anyone to find it unless the sun is directly above the surface”

He also said that since the sun is never directly above the moon’s surface in that region, it would have been so difficult to spot any debris.

Vikram lost contact with ISRO following its launch from Chandrayaan-2 orbiter on September 6 last year when it tried to make soft-landing near the moon’s south pole.

On July 22, 2019, the GSLV “Bahubali” rocket, blasted off from the second launch pad at Sriharikota in Andhra Pradesh carrying Chandrayaan-2 Orbiter, Vikram Lander and Pragyan Rover. 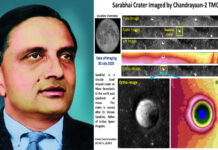